Apple’s most recent iPhone update, iOS 14.5, adds a slew of new features for users to enjoy.

The upgrade brings enhancements to Face ID, including the ability to recognise you while wearing a face mask, as well as new emoji updates and a few other enjoyable new features. However, iOS 14.5 also brings a much more significant and divisive new feature: App Tracking Transparency, which is Apple’s name for a privacy feature that is shaping up to be the company’s next big battle amongst third party application providers and businesses once the update is implemented.

What is App Tracking Transparency?

Before iOS 14.5, developers could use a host of tools to track user data from within an app. This could include everything from your age, location, health information, spending habits and browsing history just to name a few. This could then be used to help the apps provide you with improved targeted advertising based on this data.

What Apple’s new “App Tracking Transparency” updates does is gives users the option to block the IDFA (Identifier for Advertisers) and data trackers that companies use, which means that iOS will start protecting your personal data whilst still providing data from the app.

So, what’s the big deal?

After reading the previous 2 paragraphs you might be thinking, “Good I want to have more control over my data and who gets to access it” and whilst for the most part you’re right, it can also lead to a few issues. Issues that a company like Facebook identified upon announcement.

Following Apple’s announcement, Facebook (who has been criticised in the past for its data protection and tracking policies) stated that the new system would make it more difficult and expensive for ad networks to reach consumers, affecting small businesses that rely on highly targeted ad campaigns.

When Apple’s update was announced, Facebook even went as far as to develop a “speak up for small businesses” site, where owners from business big and small spoke out about Apple’s changes. 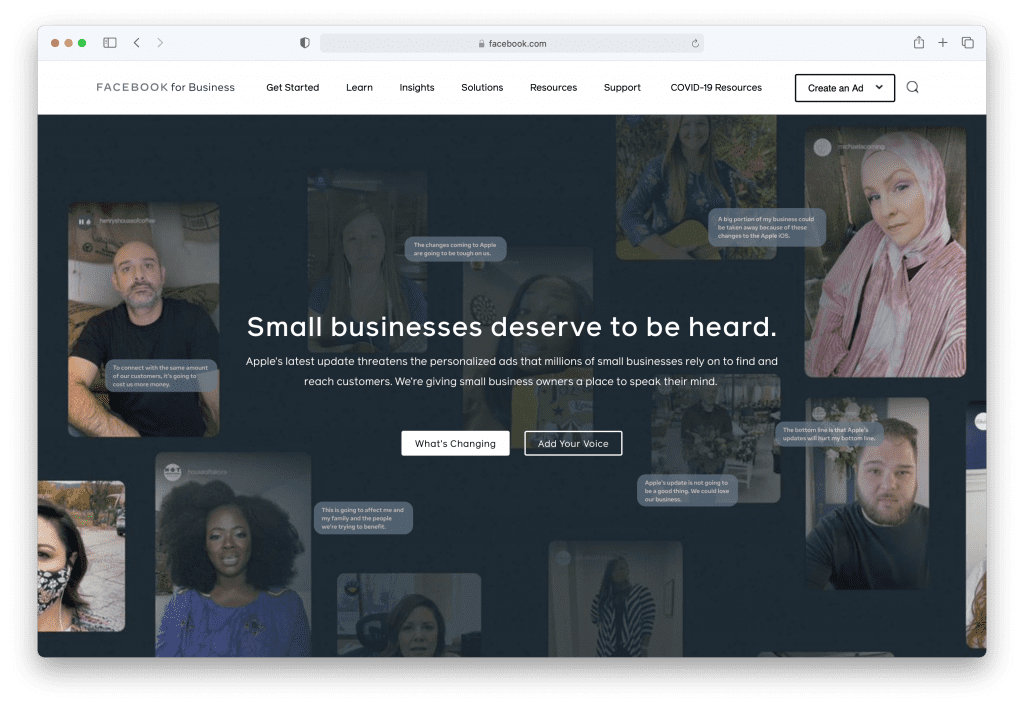 Facebook stated, “While limiting how personalised ads can be used does impact larger companies like us, these changes will be devastating to small businesses, adding to the very challenge that they face right now”.

After what has no doubt been a tough 12 months for businesses across the world, Apple’s new “App Tracking Transparency” (ATT) update hasn’t really come at the best of times. With smaller businesses than ever relying on online ads to reach their customers it can be difficult to determine which metaphorical horse to back; Apple, who is wanting to provide iPhone and iPad users with the ability to control which apps are allowed to gather their data, or Facebook, who are fighting Apple to retain access to personal data for the small businesses that rely on it.

However, in what appears to be an end to the fight against Apple, recently Facebook somewhat admit defeat and published a blog post on what is changing and how to prepare for Apple’s ATT update.

With Google being an even bigger advertising company than Facebook you might think that they would have been in Facebook’s corner. However, Google took quite a different approach by informing their community that “Most advertisers will not be affected”, and rather than coming up with a whole web page to fight the change, has opted for a more civilised and accepting approach to Apple’s ATT update.

Google have developed their own web page which doesn’t scream “Small businesses deserve to be heard!”, but rather “Here’s how you can prepare for Apple’s ATT update”. It seems Google understood that Apple made and their mind up when the update was announced, and rather than attempt to argue with them, accepted the change on the horizon and put together a thorough FAQ page that addresses frequently asked questions about the ATT changes, and how Google Ads advertisers can adapt to them.

How will you be affected?

If you’re an Apple user the only thing that is changing for you is the ability to control which apps and businesses can access your data and which can’t.

However, if you’re a small business that relies on your audiences personal data to create personalised ads you could be in for a challenge if this is the first you’re hearing of the ATT update.

To help you prepare the Darlington based digital marketing team at Hush Digital is here to help you regardless of if you advertise on Facebook or Google. Get in touch with the HushBots here.

Why Should You Be Outsourcing Your Search Engine Optimisation?