It is crazy to think that 2019 is nearly done and dusted. We’ve had a bumper year at Hush, from our big rebrand to becoming a Google certified partner to new Bots joining the team. So, with the end of the year approaching, let’s have a look back at some of the highlights from HushHQ and the HushBots.

After the festive break, the HushBots returned to work in January recharged and ready to smash 2019! We started with our Digital Marketing Manager, Chris, celebrating his first Hush-iversary. Shortly after, the digital marketing team completed the required skills needed for Hush to become Google certified for Google Ads, yet another feather to our bow! We finished January off with another Hush-iversary, this time for our superstar Digital Marketing Exec and Designer, Scott (Skirbs), who celebrated 2 years with us.

Love was in the air in February ♥️ We started the month with our first launch of the year for our good friends at Stone Technical Services, swiftly followed by a brand new website and order management portal for the team at Harrison EDS. Who could forget, on Valentine’s Day we shared our very funny, “Why We Love Geonet” video (as we were still Geonet Solutions back then!). The response to the video was amazing and we will definitely be doing something similar next year.. Keep your eyes peeled! Moving into the end of February, we had a huge celebration on our hands as our Business Development Director and resident Queen, Rosie, celebrated 5 years with us.

March was a very special month for Hush this year ✨Things behind the scenes really started to ramp up with our impending rebrand. We knew what we were doing and when it needed to be done by but our clients and the wider business community was waiting on tenterhooks for the launch of our new brand. Before the big unveiling at the end of the month, we sat down with Rosie to produce a new vlog for International Women’s Day, and Chris W and Jake also produced the snazzy new films for our Hush launch day. 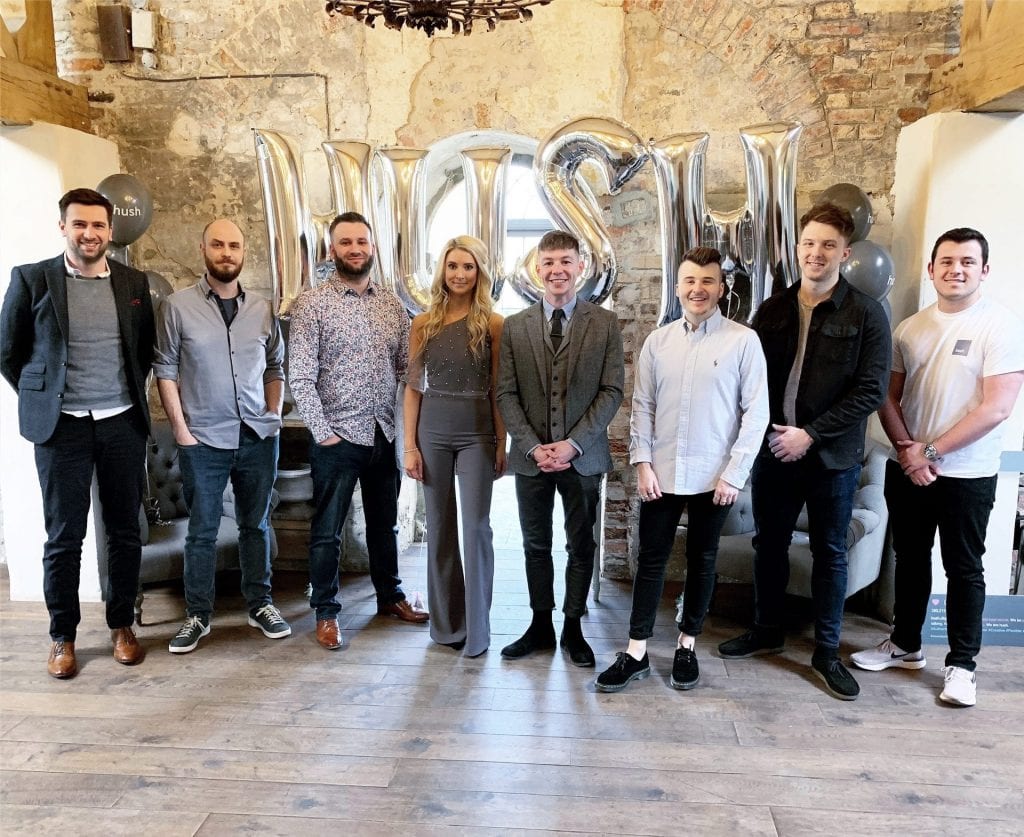 On 28th March 2019, we launched our new brand and Geonet Solutions became Hush Digital. We celebrated with friends, family and clients at a gorgeous launch party at Middleton Lodge. To date, this was the biggest day in our history and we were so proud to share it with everyone.

We started April with our first launch as Hush! We launched a fantastic website for Maypole Tipi, a website packed with character and innovation. 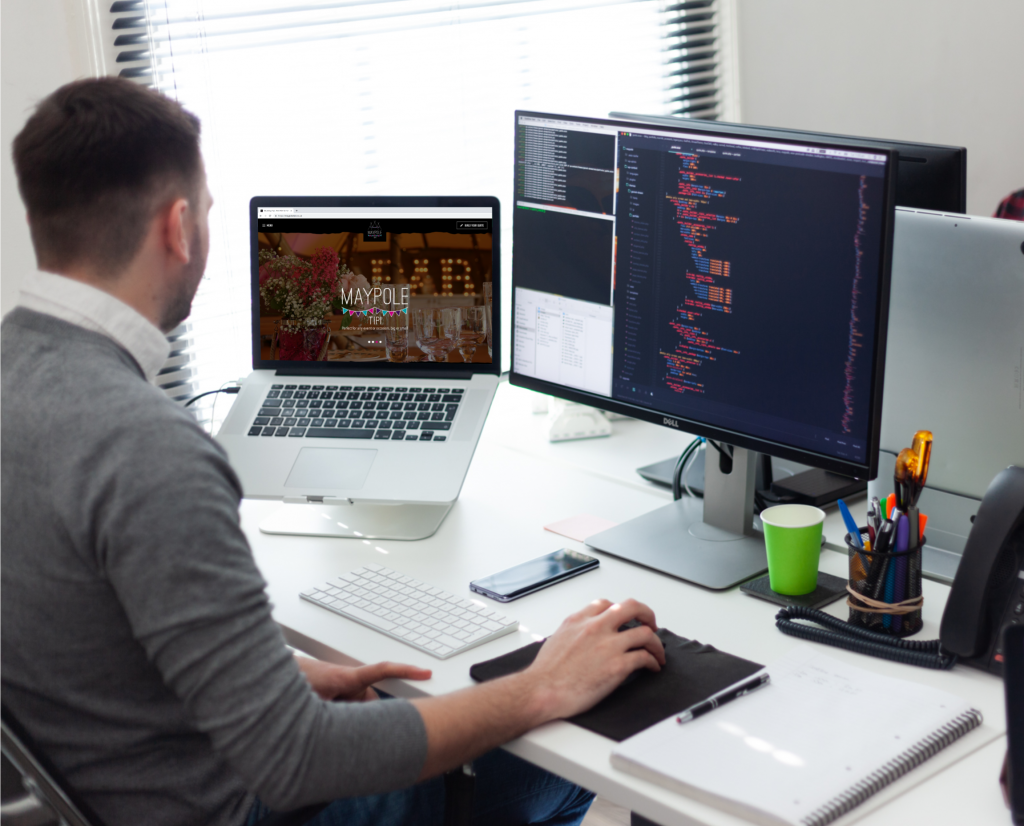 Fast-forward a few days and we hit another big milestone. Our Creative Director, Jonny, celebrated 11 years working here at Hush – oh how far he has come from tea boy back in 2008 to running the joint today! After scoffing our own bodyweight in Easter eggs and other chocolatey goodness, we dovetailed into the end of April with another launch, this time launching a new and completely bespoke eCommerce website for made-to-measure screen specialists, Streme.

May was another busy one for the ‘Bots with loads more launches and events. We kicked off the month by supporting our good friends over at Teesside University Students’  Union as sponsors at the Athletic Union Awards. We launched a stunning new-look website for long-term client Holiday at Home, refreshing the front-end visuals and integrating a new content management system to work better with the luxury holiday rental company’s more recent requirements. It was a month full of cake too, as we celebrated TWO birthdays for Jake and Jonny, and wrapped up by launching a simple one-page information site for London-based SMI Data.

We’d be lying if we said the highlight of June wasn’t National Fish & Chip Day, when our Digital Marketing Manager Chris ate what could only be described as a small whale, and spent the afternoon in serious food-coma discomfort! It wasn’t all about the grub though (we promise) as we launched an ace new product showcase site for Transport Technology Systems (TTS), and we celebrated all of the HushDads (Dads of the ‘Bots and ‘Bots that are Dads) on Father’s Day.

July was another big milestone for us as Hush celebrated our 22nd birthday, originally forming under a previous name waaaay back in 1997! This obviously called for BBQ celebrations and more cake.

It wasn’t all play and no work though as we were delighted to win the tender for Teesside International Airport this month, following its recent ownership takeover and rebrand. Our lovely Lewis (full stack developer) celebrated his 3rd Hushiversary and Rosie cleaned up at the Women’s World Cup Sweepstake. Basically, we did quite a lot of celebrating this month!

After an exceptionally busy July with a tonne of amazing new contract wins, we had to put the feelers out to find a new HushBot, so we began the search. We also were delighted to win the contract for the new Saint Michael’s Hospice website this month, which is due to launch Spring 2020 inline with key happenings at the charity. We also welcomed aboard Teesside High School to support their in-house marketing team with ongoing digital marketing and technical support to take their strategies to the next level.

September was another busy one all-round. We had lift off for the brand new Teesside International Airport website with some amazing feedback from the Mayor of Tees Valley. 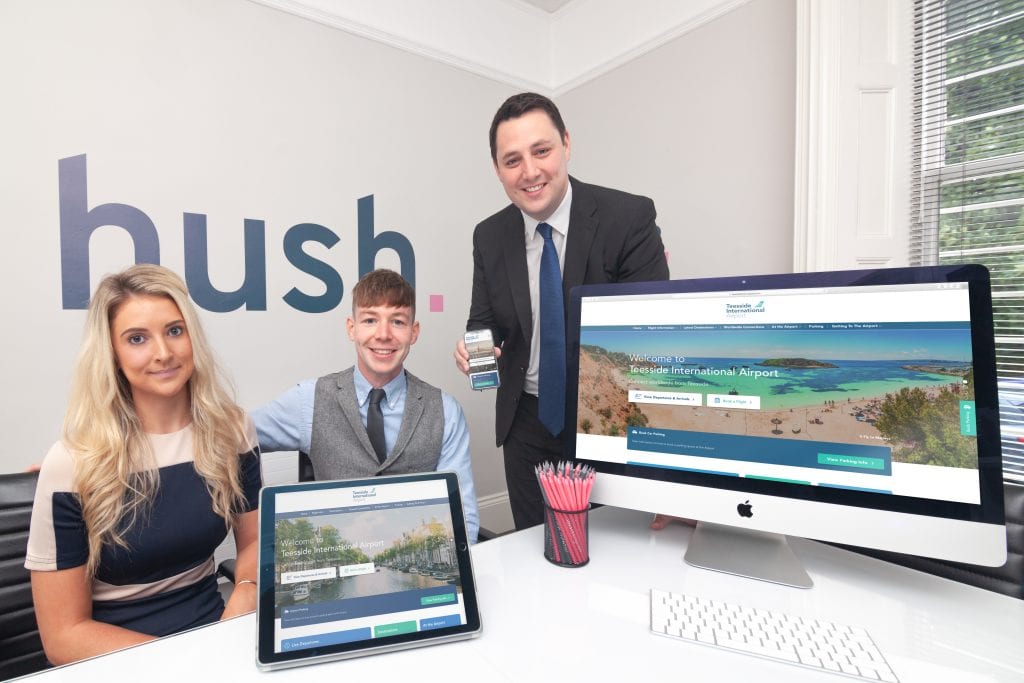 We completed another successful round of prospectus design and print jobs for Conyers School. We also celebrated our digital marketing manager Chris’ birthday and our business development director Rosie’s birthday this month, calling for a celebratory team night out to wrap up another ace month.

We finally ended the hunt for a new senior developer in October, when we hired a new superstar, David. We also celebrated one of our longest serving HushBots, Ben, who hit his 4 year Hush-iversary this month. We launched a stunning new brochure website for the recently rebranded MJF Group, as well as launching our latest app project for Let’s Go Tees Valley’s job seeker campaign management. We had a bit of fun on World Boss Day with our two Directors, Jonny & Rosie, with a hilarious Boss vs. Boss vlog. October was wrapped up in typical Hush style with a Halloween (or ‘Hushoween’) buffet and dress up. We’re suckers for any type of themed event!

Jonny and Rosie ventured down to Birmingham in November to exhibit at the Farm Business Innovation Show and host 2 seminars to chat to attendees about top website and digital marketing tips. November was a very charitable month too at Hush as we supported HushBot, Ben, in his Movember challenge as he transformed from a baby-faced boy to a middle-aged wing commander, raising £210 for Movember. We also donned our fluffy Pudsey ears and gave our donations to support Children in Need, and supported our client Daisy Chain at their Winter Ball to show our support and raise money for families affected by autism.

The HushBots favourite time of year! We obviously had our tree up before 1st of December even came around! December wasn’t just full of festivities for Hush though as we were super busy with bags of exciting client work too, including a stunning new mini-site for the Royal Northern Sinfonia, Orchestra of Sage Gateshead, which launched just 1 week before Christmas. We also supported another amazing charity client, Teesside Hospice, at their Christmas Celebrations event. Obviously we had loads of festive fun too including an amazing Christmas party in Yarm, Christmas Jumper Day, a full team MUGshot of our festive mugs, lots of Christmas card and pressie deliveries to our amazing clients and an end of year buffet.

It has been a phenomenal 2019 for Hush, with the rebrand back in March being the true highlight of our year. We can’t thank our customers, staff, suppliers and friends of the company enough for their continued support and we cannot wait to see what 2020 has in store. Watch this space!

SEO Rankings vs Traffic vs Conversions

To provide the best experiences we use technologies like cookies to store and/or access device information. Consenting to these technologies will allow us to process personal data such as browsing behaviour on this site. Not consenting or withdrawing consent, may adversely affect certain features and functions.
Cookie SettingsAccept All
Manage consent

This website uses cookies to improve your experience while navigating through the website. Out of these, the cookies categorised as necessary are stored on your browser as they are essential for the working of basic functionalities of the website. We also use third-party cookies that help us analyse and understand how you use this website. These cookies will be stored in your browser only with your consent. You also have the option to opt out of these cookies. But opting out of some of these cookies may affect your browsing experience.
Necessary Always Enabled
Necessary cookies are absolutely essential for the website to function properly. These cookies ensure basic functionalities and security features of the website, anonymously.
Functional
Functional cookies help to perform certain functionalities like sharing the content of the website on social media platforms, collect feedbacks, and other third-party features.
Performance
Performance cookies are used to understand and analyse the key performance indexes of the website which helps in delivering a better user experience for the visitors.
Analytics
Analytical cookies are used to understand how visitors interact with the website. These cookies help provide information on metrics the number of visitors, bounce rate, traffic source, etc.
Advertisement
Advertisement cookies are used to provide visitors with relevant ads and marketing campaigns. These cookies track visitors across websites and collect information to provide customised ads.
Others
Other uncategorized cookies are those that are being analysed and have not been classified into a category as yet.
SAVE & ACCEPT